Marmaris, one of Mugla’s most popular holiday destination, attracts visitors with its history, natural beauty, entertainment places, beaches, bays and islands. The city’s history stretches back to the 1200s, and due to its geopolitical importance, it has hosted many civilizations for thousands of years. The city has been known by various names throughout history, including “Physkos, Marmarisos, Mermeris, Mimaras,” and “Physkos, Marmarisos, Mermeris, Mimaras.”

Marmaris is one of the most popular ports for guests seeking yacht charter services. In addition to the blue cruise route, which begins in Marmaris and extends to Gocek Bays, Fethiye, Bozburun, Orhaniye, and Selimiye, Datca, commonly known as Hisaronu Bay, is also considered the blue cruise line’s starting port. Our visitors who like short trips choose the Selimiye or Bozburun blue cruise route over the Marmaris Port.

Places Worth To Visit In Marmaris

Marmaris Castle and Museum of Archeology

Although it is not a very grand structure, Marmaris Castle, the city’s prominent symbol, is one of the city’s most valuable historical remains. The earliest walls were built in BC, according to the historian Herodotus. It was created in the year 3000. According to certain sources, BC was the time of the Gods. It is claimed to have been constructed in the year 1044. Before Suleyman the Magnificent’s Rhodes campaign, the castle, which had been renovated during Alexander the Great’s reign, was utilized as a military base by bolstering its fortification with improvements. Since 1991, Marmaris Castle, which was rebuilt between 1980 and 1990 with the goal of preserving and keeping history alive, has been acting as the Marmaris Museum. It has a total of seven closed sections. Two of them are used as archeological rooms, while the third is used as an ethnography hall. The archeology rooms and museum garden feature stone items, amphorae, oil lamps, various containers, glass objects, arrowheads, coins, and ornaments from the Hellenistic, Roman, and Byzantine periods. Weaving, carpets, rugs, furniture, copper kitchenware, weaponry, and ornaments relating to daily life from the end of the Ottoman period are on display in the ethnographic hall. Other than these halls, the closed spaces are used as art galleries, offices, and warehouses. From the castle’s bastions, one can get a spectacular view of Marmaris. Before embarking on their Marmaris yacht charter service or after the conclusion of their blue cruise, we recommend that our passengers pay a visit to the Marmaris Castle and Archeology Museum, which is only 3-4 minutes away by foot from the dock.

In Tashan, the Halici Ahmet Urkay Museum is located on the road. Ahmet Urkay, a businessman who was born in Denizli-Tavas in 1995, founded the museum under his own name. The museum houses archaeological and ethnographic items. Ahmet Urkay, who established this private museum to house the works he collected over the years on his travels, brought a tremendous deal of riches to Marmaris.

Bedesten Bazaar, where you can practically feel the spirit of antiquity in some areas, will give color to your journey to Marmaris. This old bazaar, which is still located in the heart of the city, has brought together hundreds of hues in the past and continues to do so today.

Suleyman the Magnificent built the caravanserai in 1545 on behalf of his mother on a route leading up to Marmaris Castle. It has seven tiny rooms and one large room. In the past, the caravanserai had cafes and souvenir stores on the lower floor, which is now covered with arches, which provided housing for those who came to the region for the purpose of rest, trade, and travel.

The Bozukkale Ancient City, which is currently known as Bozukkale and is located in the southwestern section of the Bozburun Peninsula, dates back to BC, despite the lack of definite information about its history. We know that the Athens army was stationed at this ancient city around 1412. A thin, long castle stands out among the ruins spread out over a large region. Round and lofty turrets in the corners and rectangular towers at the edges supported the castle. Both extremities of the structure include cisterns carved into the rock. The building was dedicated to Zeus Atabyrios, according to an inscription etched into the rock southeast of the city walls.

Amos is an ancient city dating to the Roman period, located on the Asarcik Hill, to the northwest of Kumlubuk Bay, south of Marmaris. The theatre, temple and some statue bases have survived from this settlement, which is surrounded by a city wall from the same period. 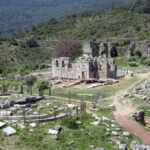 The Ancient City of Physkos

In the Caria language, the port city of Physkos, which was located in Asartepe, north of the city centre, signified ‘Natural City.’ The city, like all Carian villages, was built on high mountain hills and slopes, and is located between Beldibi and the Mosque courtyard. Its origins can be traced back to 3400 BC. In 334 BC, Alexander the Great took control of the city. Suleiman the Magnificent (1520-1566), who came to the region for the Rhodes expedition, had the Physkos Castle rebuilt in the city, which was under Roman, Eastern Roman (Byzantine), Mentese, and Ottoman dominion. Unfortunately, it is thought that most of the city, which only the fortification walls have reached today, is under the ground.

The archaeological cave, which is located on the peninsula known as Cennet, Yildiz, or Nimara Island, has a large interior. The stalactites and stalagmites studied were found to be 100,000 years old. The cave, which was discovered in 1998 when two sandstone female sculptures were uncovered, was classified a first-degree archaeological site in 1999, and excavations began in 2007 under the direction of the Marmaris Municipality to prevent damage. 500 coloured glass, drills, chisels, stone and bone piercing tools were discovered in the cave where traces of humanity dating back 12 thousand years from the Paleolithic to the Bronze Age were discovered. The presence of numerous colourful glass beads shows that this location was once a bead workshop. Two stone terrace votive areas, pot fragments, 50 terracotta human figurines, and plenty of coins are proof that the cave was also occupied throughout the Roman period in the cave, which was utilized as a votive and temple location during the Roman period.

The ancient city, located 35 kilometers from the city centre, is a town built on a 270-meter-high hill near Turgut Village. The city contains remains of the Hellenistic, Archaic, and Geometric periods, as evidenced by architectural methods and tiny artifacts. There are ruins such as a cemetery with stepped pyramid tombstones unique to the region, several cisterns, foundation indications of building remnants, a sanctuary, a port, and a mausoleum with a pyramid roof among the city ruins. The tomb belongs to a warrior named Diagoras, according to a difficult-to-read inscription inside the tomb, which dates from the 4th and 3rd century BC.


The Archeology Park, which was created in the centre of Marmaris, was established on an area of ​​2100 square meters on the slope of an 8342 square meter hill known as the Rocks of Goodness. At the same time, there are ruins starting from the 4th century BC in the region, which is considered as a first-degree protected area.

21 km from the center. The historical mosque, located in Kemeralti district, was built in 1789 by Mengenelizade İbrahim Ağa.